3B: Build Functions for Remixable Code

Reusing/remixing code is a central tenet of the free and open source software movement. And indeed, it’s a central tenet of the Internet, as we’ll discover in the Rainbow Unit. But as we’ve discovered throughout the book and especially highlighted in The Unknown Tech Innovators, there’s also an active work to give the credit for innovations to certain people, and particularly to white males.

Take a few minutes now to reflect back on the innovative designers and builders of the code we’re now using for our own Community of Practice works, and especially those hidden and forgotten that we’ve worked to bring forward as part of our explorations.

Let’s take a minute to reflect back on the final exercises in sessions 1 and 2. Note that in the “Five Digit Counters” exercise, we used a range of and to expand our opportunities for collecting and sharing data using several . 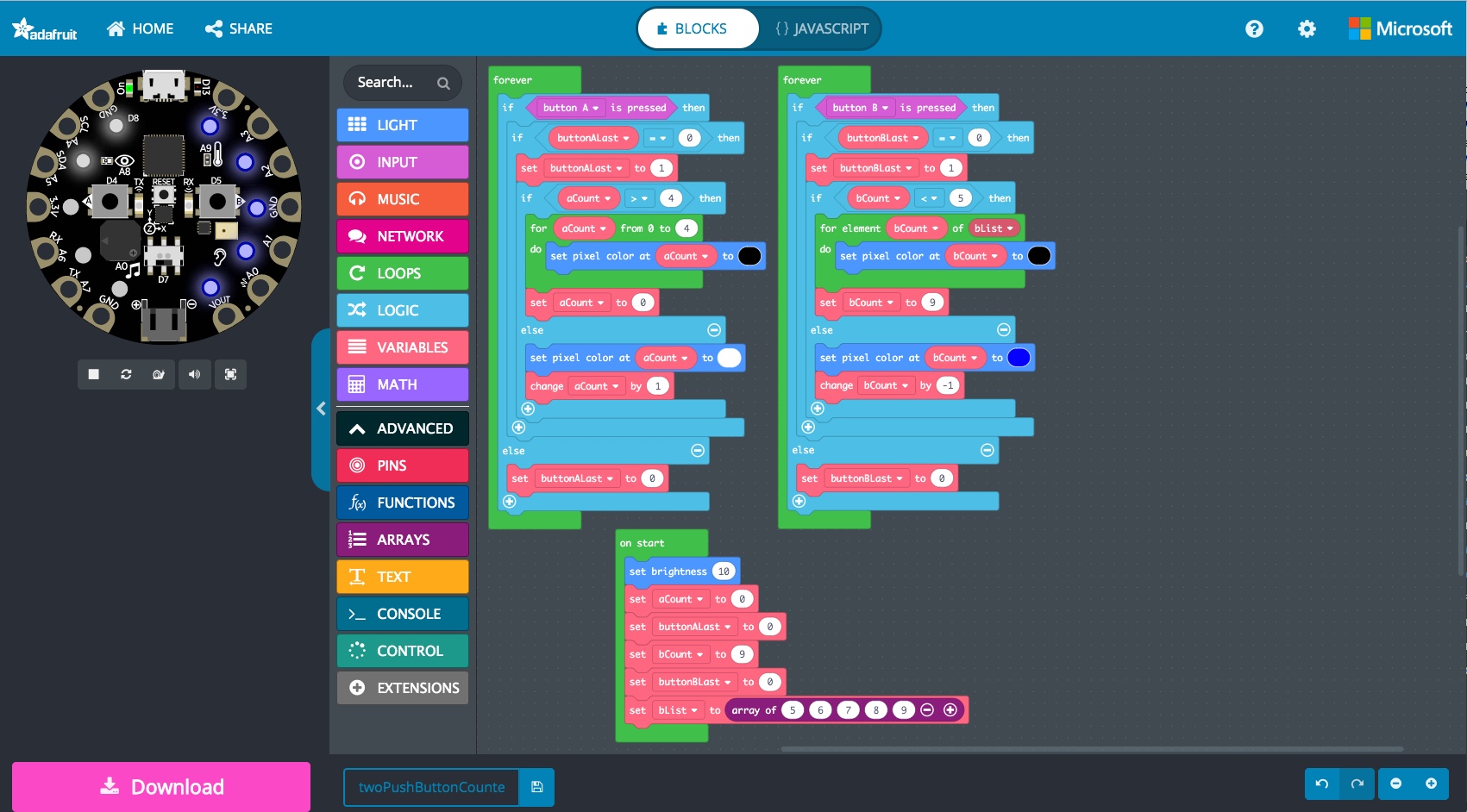 Compare this to the “Middle C Scale Toolbox Trumpet” exercise. Here, we committed our attention to deductive reasoning and to guide us in the creation of an appropriate, functional sequence of , thereby playing the notes in order from Middle C to Middle B. 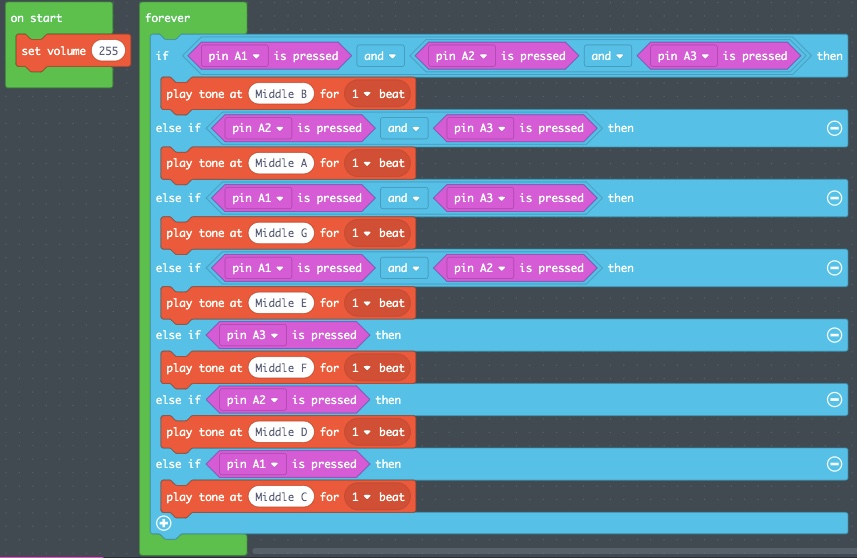 Let’s begin by considering how we could remix the Toolbox Trumpet using variables and functions to expand the capabilities of this tool.

Here’s a video screenshot of these steps to compare with your own process. Feel encouraged to change 1X to 2X to play it back at high speed. Note that the console provides a means to enter a new level of testing within the simulator. Remember that we cannot test the pressing of multiple capacitive touch sensors simultaneously. At this point, we can only assume the “change” statement will add in the value, rather than replacing the previous value.

For this reason, we will now create a new function called playTrumpetNote. We’ll pass the CapTouchCounter value to the function and set it up to determine the Hertz the note should be played at. 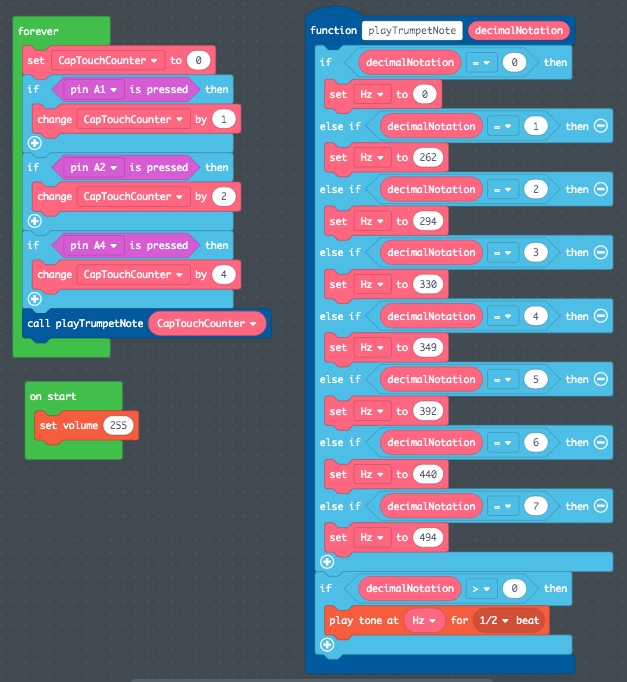 Functions serve to run certain control flow statements and other code when called upon by other parts of the program. Indeed, MakeCode itself is written using many thousands of lines of code, most of which we do not see or even know about. But within that code, they make a call to the FOREVER function we create. This is the MakeCode implementation of the Clocked Sequence Programming I did as a graduate student back in 1990 to collect data from a controller I designed to do my own research. Then it was in the C programming language, but the lines of code themselves have a lot of similarities.

By moving the playing of a note into its own function, we can now use the more general capTouchCounter value for a wider range of activities beyond just playing a note in a C scale, and potentially even instead of that.

Indeed, take a moment to drag an “If…Then” logic block from the LOGIC category and drop it around the “call playTrumpetNote CapTouchCounter” block. Then, at the very bottom of the INPUT category, drag out a “switch right” block and replace the “True” statement within this “If…Then” logic block. Save and flash this to your Circuit Playground Express. Now, depending on the position of the slide switch located at D7 on the Circuit Playground Express, the notes of your scale will or will not be played when pressing the “valves.” However, the CapTouchCounter values will still be calculated, as seen if you use a CONSOLE category “console log” block to record the “CapTouchCounter” value. 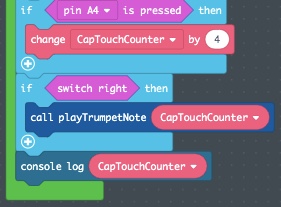 This design could be seen as equivalent to the Middle C scale with no buttons pressed, Low C scale with button A pressed, and High C scale with button B pressed. Let’s do a remix of our code to see how an electronic device can do the same thing, sometimes with added functionality, by remixing the lines of code. To do this, we’ll add these calculations into the FOREVER function, and then pass them on to the playTrumpetNote function.

Steps and images are provided. Or, you can download the completed file:

Open and review it in MakeCode, and flash it to your Circuit Playground Express for further prototyping. 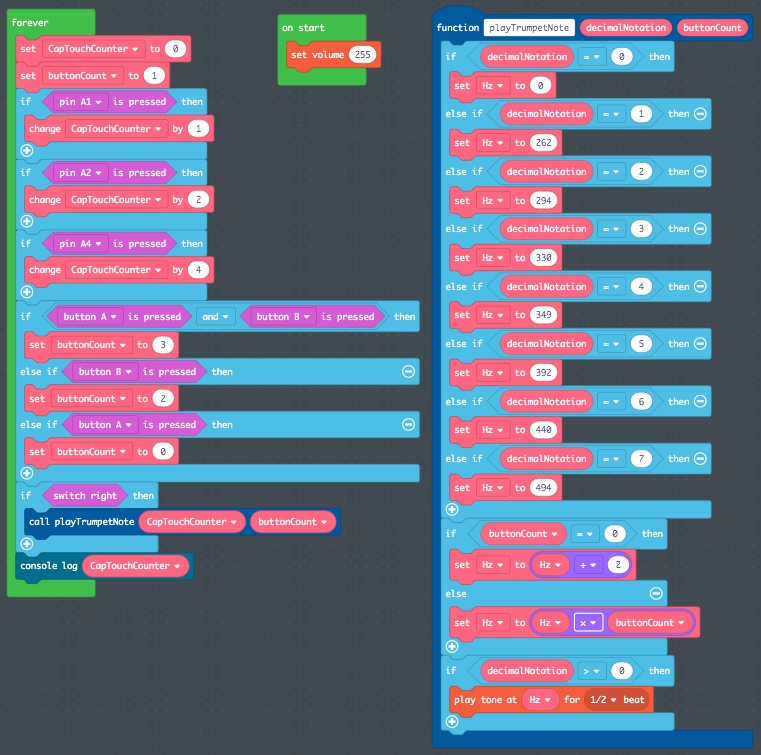 We should now have two variables, CapTouchCounter and buttonCount, that we can pass to functions. As a part of the “Comprehension Check” for this session, let’s next look at how these variables can be remixed in different functions.

We’ve used the LED Pixels as indicator lights and even 5 digit counters in a few exercises now. As a “Comprehension Check,” create a new LED Pixel Counter function to do the same with our Toolbox Trumpet. Indeed, this can prove helpful if we’ve forgotten we have the sliding switch to the left, keeping the Toolbox Trumpet notes from being played by the Circuit Playground Express speaker. Record a video image of this being run from your physical Circuit Playground Express, as well as a copy of a screenshot of this new function as a way of demonstrating you’ve learned the core steps to create a new function.

Here’s a short video demonstrating a simulator test of the prototype I created.

A convenient name to represent numbers that change from time to time. Look at the top of your smartphone, and you may see the battery percentage charge remaining. A program exists on the smartphone to read this variable and provide a visual representation of it. Variables are often used within code to evaluate changes in patterns to determine which series of code should be executed at a given moment.

Lists and arrays are two commonly used ways to store data. A list is a set of data arranged in some order. Lists are mutable, meaning that the order of the items within the list can change. This allows for sorting, shuffling, adding, and deleting items from the list. One form of lists, called an array, is an indexed set of related elements associating one thing with another and are especially useful in control flow loops such as button counters. However, insertion or deletion of items within an array's list can prove difficult.

A unit of code defined by its role within a more general code structure. To execute the function, it is provided one or more inputs, and produces a concrete result. This result may, but is not necessarily required to, be returned back to the caller of the function.

A form of algebra used in mathematics, electronics, and computer hardware and software. At its base, all values are found to be either true or false using the Boolean operators "OR," "AND," and "NOT."

A command that determines under which a specific path should be executed based on the occurrence of another sequence in the program.

Binary notation is based on the base-2 numeral system using only two symbols. The symbols used are the digits 0 and 1. Binary is the standard notation for Boolean true or false logic tests. This is in contrast to the base-10 numeral system commonly used in the English language, and which uses the digits 0, 1, 2, 3, 4, 5, 6, 7, 8, and 9.