The Raspberry Pi, like many microcomputers and microcontrollers, provides pins to which you can attach transmit and receive wires to connect with personal computers. In this way, even if there is no network or keyboard, mouse, and monitor to provide access to one of these devices, a simple USB to serial cable can be used to configure, diagnose, or perform regular tasks on it. Many operating systems, such as the Raspberry Pi OS, also provide a control window to output and input text from and to the device through this serial interface.

A note on the technical terms Master and Slave:

Communications between devices takes many shapes and forms using a range of protocols. Three of the most commonly used are:

We’ll accomplish this in three steps:

STEP 1: Set up the Raspberry Pi to store and play counterstories using the OMXPlayer. This may have already been done previously as it is an exercise within the Orange Unit.

STEP 2: Set up your Circuit Playground Express. The Toolbox Trumpet will now be expanded to use components of the MakeCode Serial UART Communications Extension to transfer capacitive touch and momentary switch data to the Raspberry Pi to play counterstories based on sensor inputs.

The first step is to set up a folder called cstories in the home directory of your Raspberry Pi, containing your counterstory MP3 files. You may have completed this step as part of the Orange Unit. If not, jump to Coding Electronics. In the steps below, we’ll continue working with this folder.

On your laptop, make the following update to the Circuit Playground Express so that it can work with the Raspberry Pi to play counterstories:

Step 3: Use the Toolbox Trumpet to Play Your MP3 Files

Alternative power option: You can provide power to the Circuit Playground Express directly from the Raspberry Pi via the USB port by connecting the red TTL wire to the VOUT on the Circuit Playground Express using a fourth male to alligator clip wire. In this way, one power source directly attached to the Raspberry Pi is all that is needed to run the whole digital Little Free Library![2]

Use three or four male to alligator clip wires to connect the TTL side of a TTL/USB Serial Cable to the Circuit Playground Express microcontroller:

Plug the USB side of the second serial cable to one of the four USB ports on the Raspberry Pi. Any one of these should work OK. You should see the Circuit Playground Express green power light go on. If not, a few tests can include:

From a web browser, enter: https://uofi.box.com/s/a93h58laobjwb69b8fipyznrjvgcc5mp

Take a glance at the code, but most importantly right click in the window to download the program as cstories.py (NOT as cstories.txt as automatically listed). Be sure to save it to your cstories folder on the Raspberry Pi. You can do this several ways:

If you have more than one cstory with intro, regular, extended, and end notes, open the text editor nano to edit the Python code with the following command. Change the variable “numStories” from 1 to the number of cstories now on the Raspberry Pi. 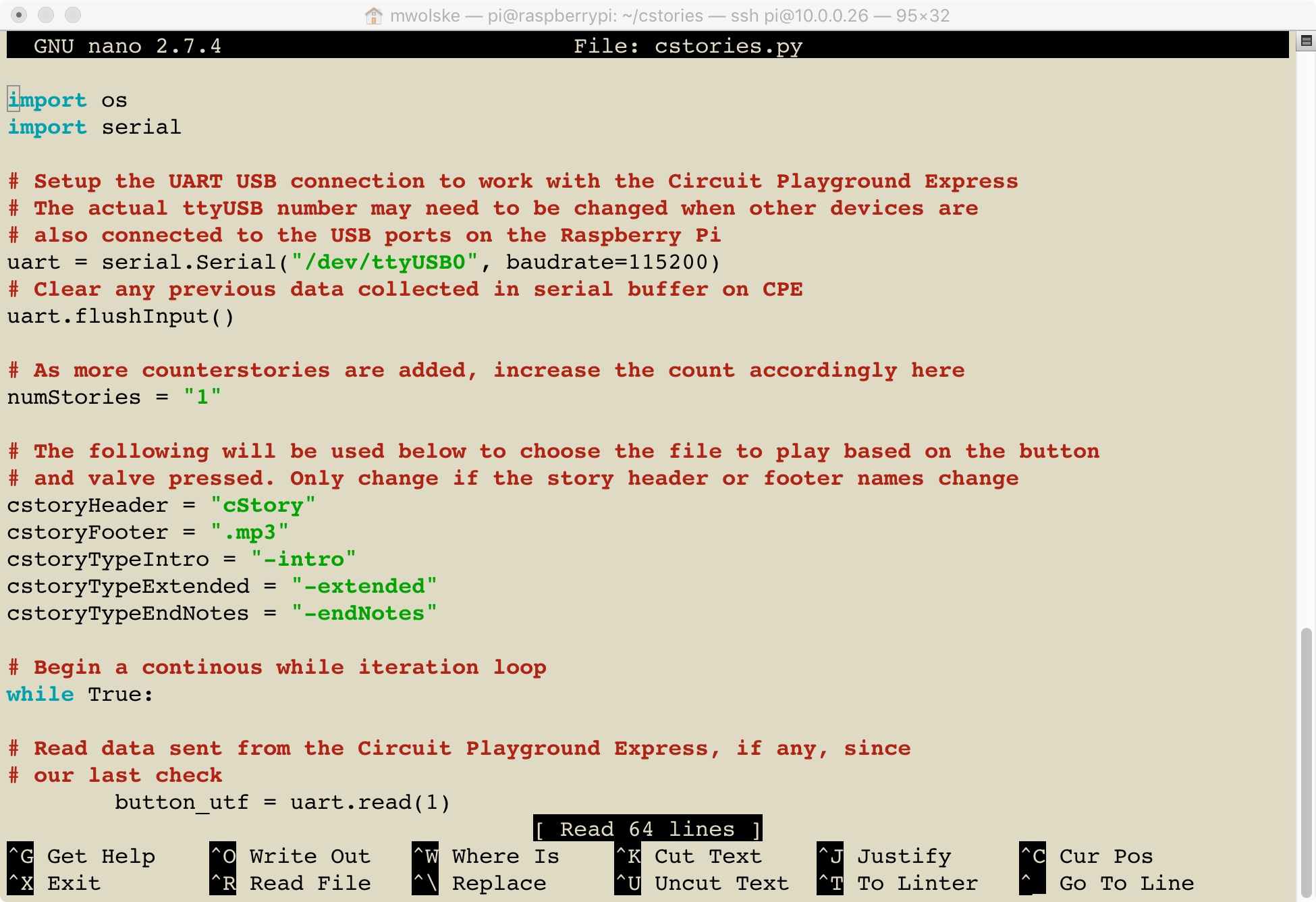 Test it all out. In the terminal window in which you have logged in on the Raspberry Pi, type the following, then touch the different Toolbox Trumpet valves to see if you can hear a story be read to you: 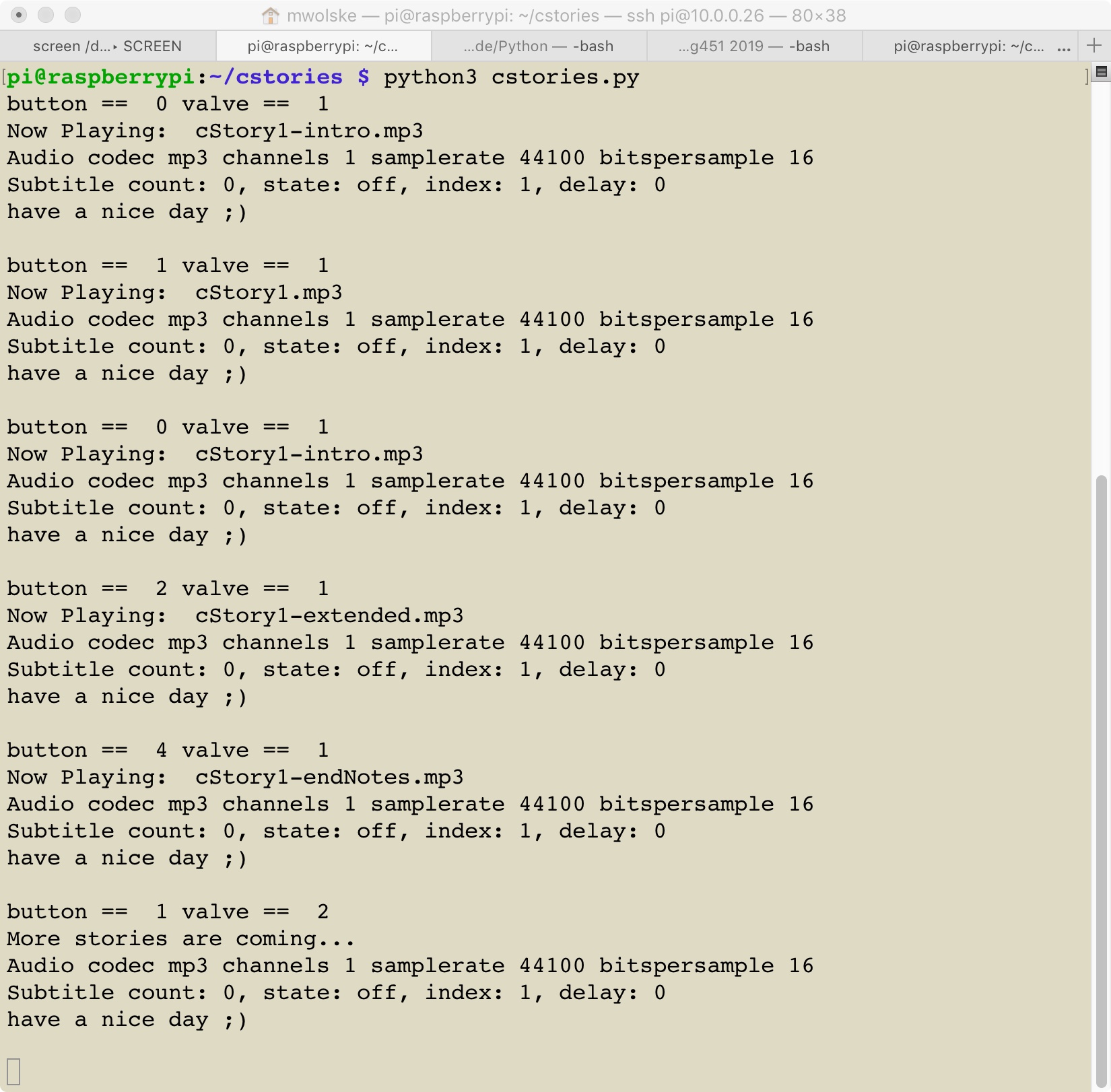 To exit the Python command output, provide a keyboard interrupt by holding down the Control (that is, CTRL or ^) key, and then hitting the ‘c’ key.

FAIL FORWARD TIP: Sometimes the connection of the USB/TTL Serial Cable from the Circuit Playground Express to the Raspberry Pi may have changed. In the terminal window on the Raspberry Pi, type:

Note the result. If nothing is listed, then the USB/TTL Serial Cable may not be connected. Otherwise, compare the returned value(s) with the one listed in the “uart” variable within the cstories.py code. The best way to do this is using nano. If the value returned from the ‘ls’ command is different from that listed in “uart = serial.Serial” then change the number accordingly in the Python code, save, and retest.

If you’ll be jumping in and out of your Raspberry Pi periodically, feel encouraged to leave it powered on, just as you would any server. Close out of your ssh connection to the Raspberry Pi by hitting ^D (that is, holding down the Control key and hitting the ‘d’ key), or by typing logout. Either way, you should see the following window display at the end, making it possible for you to SSH back in via Terminal or PuTTY whenever you need to. 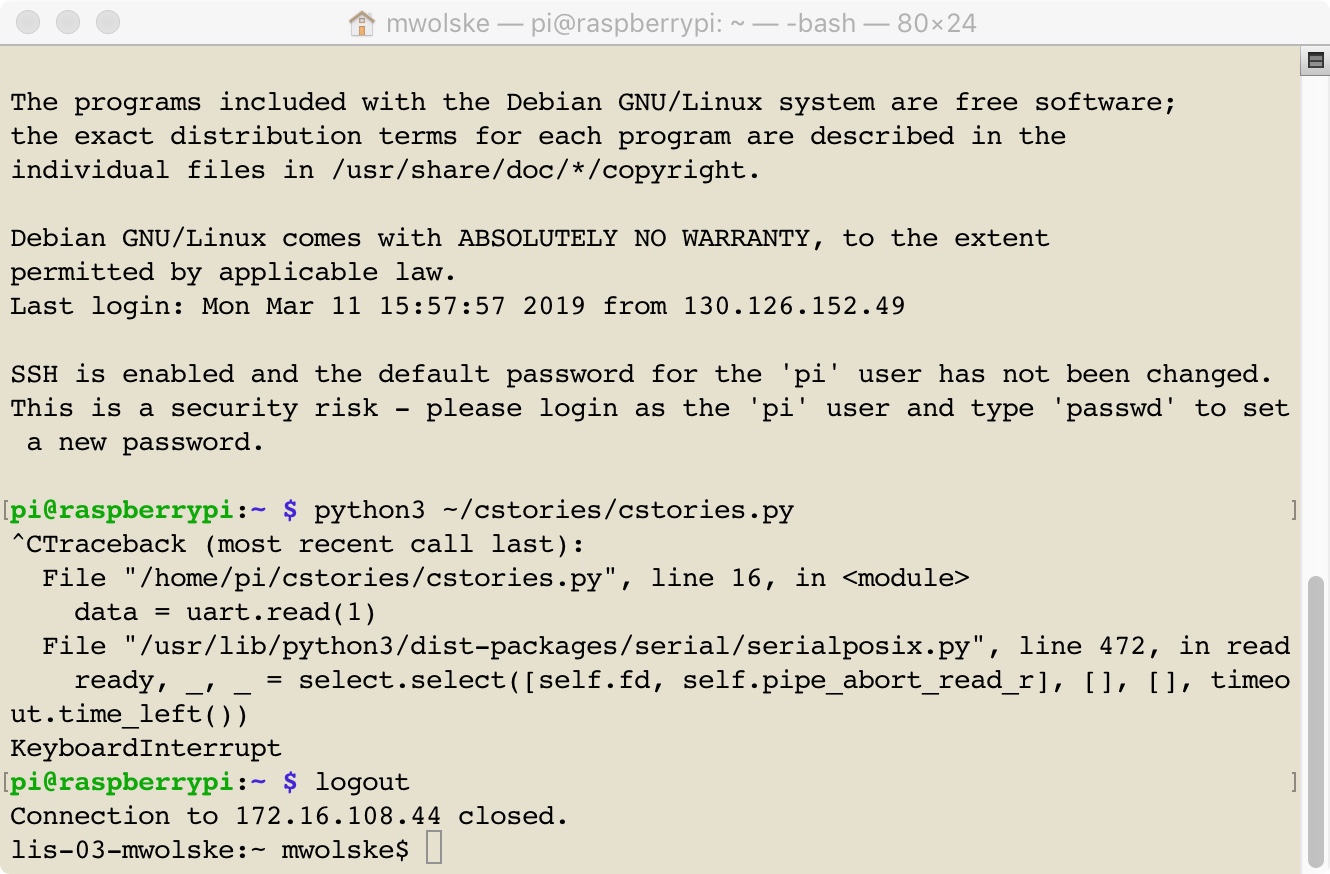 The primary objective of the Blue Unit is to bring together our microcontroller and microcomputer systems as a means of sharing data between devices, thereby creating a basic physical network. That is, we’ve worked to create a digital networked information system. Together, we can advance a range of technical skills in addition to a number of cognitive and socio-emotional skills to help your community of practice use a growth mindset to build these multi-layered systems.

Now would be a great time to revisit the lesson plan listed in “Valued, Inclusive Information and Computing Technology Experiences.” Spend some extended time with your Professional Journal Reflections this week, especially responding to the probes at the end of that session. As you reflect, bring our activities to date into conversation with the capability approach and inclusive computational thinking frameworks brought forward in this session.

A printed circuit board is a board base made of fiberglass or glass-reinforced plastic with one or more layers of copper or other conductive traces placed on one or both sides of the board base. If you've ever tie dyed a shirt, you've got a good starting point for considering the printing process of a circuit board. Individual electronic components and integrated circuits are then soldered onto specific trace paths to build complex electronics. A small printed circuit board was used to build the 5-Key Capacitive Touch Sensor used in our kit.