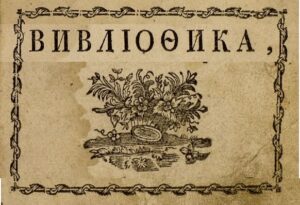 We are excited to announce that Vivliofika: E-Journal of Eighteenth-Century Russian Studies has just published its first volume (Volume 8) with IOPN Journals, after having successfully made the transition from Duke University Libraries to its new institutional home at the Library of the University of Illinois at Urbana-Champaign.

Vivliofika, an open access, peer-reviewed, scholarly journal devoted to eighteenth-century Russian studies, is the flagship online publication of the Eighteenth-Century Russian Studies Association (ECRSA), an affiliate group of the Association for Slavic, Eurasian, and East European Studies (ASEEES). Managed by Robert Collis, Visiting Assistant Professor of History at Drake University, Vivliofika annually publishes original scholarship and book reviews on the culture and history of the Russian Empire during the long eighteenth century (c. 1660-c.1830) in all the major languages in which Imperial Russia is studied.

Vivliofika is a truly transnational endeavor, featuring scholars from around the world and across many disciplines, working in many languages. After 1991, we hoped that scholars across the old Cold War divides could collaborate in future conversations about the past. A model open journal, Viviofika also realizes this ambition, and we are fortunate and excited to host it now at Illinois, thanks to our wonderful colleagues at IOPN.— John W. Randolph, Director of Russian, East European, and Eurasian Center and Associate Professor in History and Slavic Languages and Literatures at UIUC, and Editorial Board member of Vivliofika

The eighth volume of Vivliofika, which inaugurates the e-journal’s move to IOPN, contains five scholarly articles, written by both senior and junior scholars, in multiple languages. These articles explore such diverse topics as eighteenth-century Russian conceptions of suicide; the Russian reception of Italian music, particularly opera-seria; the history of a specific early 19th-century Russian literary scandal; an analysis of what a famous writer’s views on using goose-quill vs. steel-nibbed pens reveal about his beliefs about the fate of Russia’s Enlightenment; and, finally, a discussion of the history and afterlife of the man’s military uniform worn by Catherine the Great during the court coup that brought her to power. In addition to the articles, Volume 8 features book reviews on The Epistolary Art of Catherine the Great, The Legislative Acts of Peter I (Volumes 2 & 3), and Language Education at the Academic University and Gymnasium in the Eighteenth Century. Authors interested in submitting to the journal can learn more about Vivliofika’s submissions guidelines at the journal website.

Skip back to main navigation